☟
In my everlasting quest for excellent (and hard-to-find) fuzz pedals I have come across 1 style, 1 variant, 1 circuit that seems to have taken over and ultimately reign supreme...

Upon seeking perfect Muffdom, one has to look much deeper than what is generally available and talked about, because you never know if you are missing out on that "hidden secret", "Da Vinci Code" Fuzz...

This neverending search has led me to a lot of places, some discussed in previous posts, but maybe the best so far would have to be the lovely circuit that lies within both,
the Maxon OD-801 Distortion & Sustainer and the Ibanez OD-850 Overdrive. 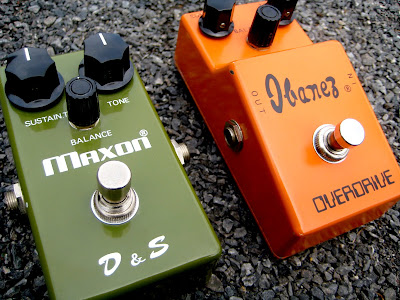 It has been known for some time around the internet that the Ibanez OD850 is basically a Big Muff clone with a modified tone stack, which came about around 1974 and was (mis)labeled as an Overdrive pedal. The result was many unsuspecting tone seekers in the mid-70s buying this pedal and being let down because, well, it's not an overdrive at all but a rip roaring Fuzz pedal! Because of this, these are fairly rare compared to the rest of the Ibanez output. But leave it to Ibanez to not be dissuaded by low sales and unhappy customers, who instead of canning the circuit continued to use it right up until the year 2000! Yes it has gone by many names, but at the core of everything from the Ibanez OD-9 to the 60's Fuzz Soundtank is that original OD-850. Now obviously things did change over the years like components and the addition of a buffer and switching circuits, but for the most part they are the same in build, even though they all sound completely different. 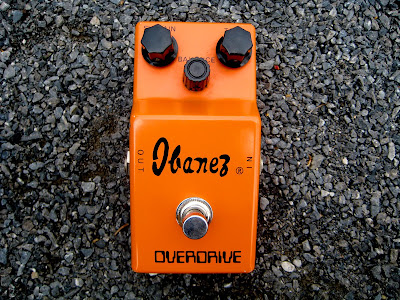 The truth is the cat has been out of the bag for a while on the Ibanez, but what was quite a bit less known was that the Maxon OD801 D&S from the same time period was not only the same pedal but its circuit board was used in the Ibanez branded pedals! And just like the Ibanez, the Maxon OD801 (precursor to the OD808) has seen many different variations over the years such as the Maxon MD-9 Magnum Distortion and the Maxon JD-01 Jet Driver and most recently they decided to reissue the original Maxon D&S, although in my opinion it sounds flat and thin compared to the 70's version. 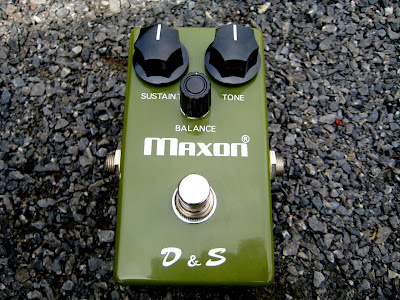 So enough with the history lesson!

As stated in the opening, I love me some Big Muff and anyone else who seems to struggle with finding what they consider the BEST one can relate; because you wish you could take the fat organic feel of the Triangle Muff and mix it with the singing sustain of the Rams Head and finally add the huge bottom end and high sizzle of the Civil War to create The ULTIMATE BIG MUFF!!!
This quest really seemed impossible...
But I will say right here, right now that the Maxon D&S/Ibanez Overdrive is the closest pedal I ever found that fits all of these criteria. It puts out that soft crunch on the chords like a Triangle Muff, it can do leads and lower gain overdrive tones like the Rams Head and it even has the low end of the Civil War Muffs. I'm not saying its perfect and in fact, what those original pedals excel in is slightly better than what the Maxon/Ibanez can produce, but its the closest thing to the full package I have ever found. 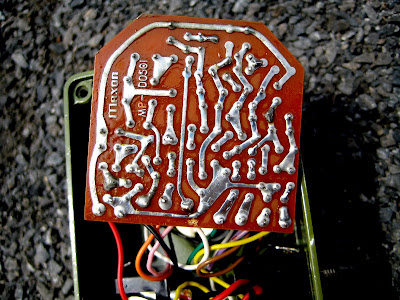 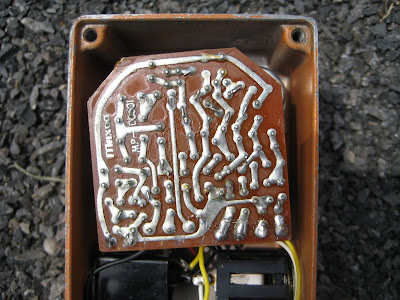 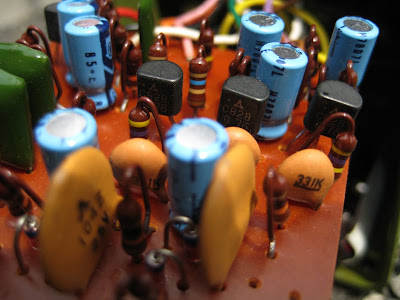 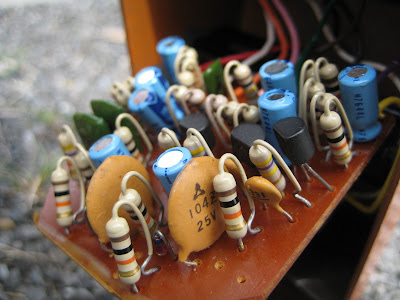 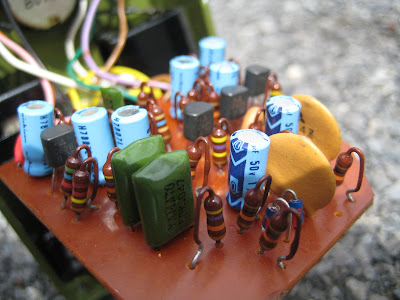 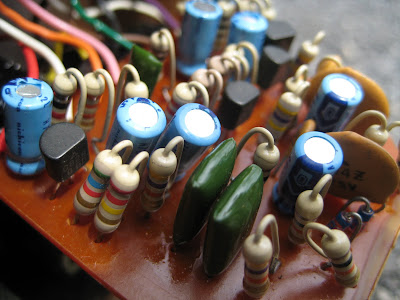 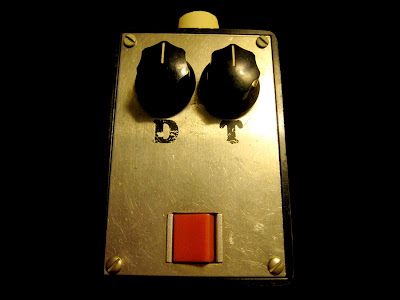 So sometimes my late night ebay binges turn out to be beneficial...

I recently saw this weird, kind of a pedal, kind of plugin, kind of homemade clone of an Electro Harmonix Big Muff on the bay for a decent price. I didn't really know anything about it, but it looked old and the only info the seller had was that he bought it with a box of other random stuff from an estate auction in Colorado and apparently the original owner said his dad had built it some time in the 70's. So going off that wealth of information I decided to take a chance on it! 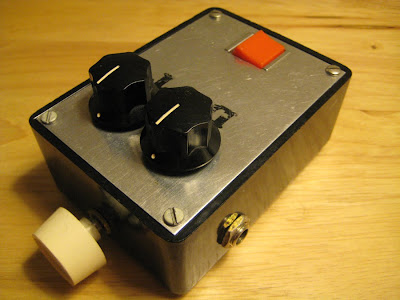 Well, I got it in the other day and it actually sounds pretty nice. It has a ton of gain available, but is really smooth at the same time. The big thing that stands out to me is the sustain seems to be endless. Its like I'm using an ebow or something! To compare it to a production unit I would say it's closer to a Triangle Big Muff than the Ram's Head, but overall not as sweet sounding.

So in the end it turned out to be good buy, but I was still wondering where this oddity came from and how old it actually was.
The only real clue I had was printed on the bottom of the circuit board in small letters; "F Cook". 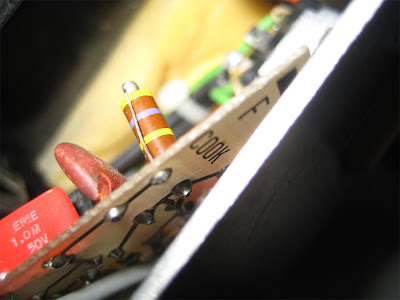 So who was this "F Cook" and why did he make this tiny fuzz box? I wanted to know so I decided to post some gut shots of this mystery Muff on a forum of like-minded pedal nerds and was conveniently pointed to the website of electrician, circuit designer and possible candidate, Forrest Cook.
After looking over his site I decided to send him an email with some photos of the pedal and to my surprise not only did he reply, but he stated that it was in fact his design!

here's the message:
Yes, I made a very limited run of those circuit boards around 1976 and sold them to a few friends in Denver and Boulder...
-
Yes, it's basically a Big Muff circuit shrunk into a much smaller
circuit board than the original.

Thanks for passing that on, I never expected to see one of those
again.

So there it is, the 'Forrest Cook' Muff. Possibly the 1st boutique Big Muff clone?/// 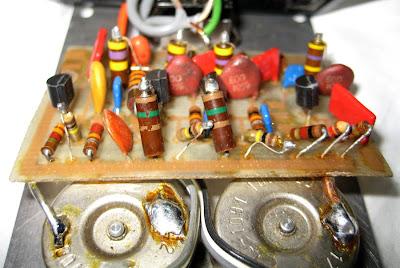 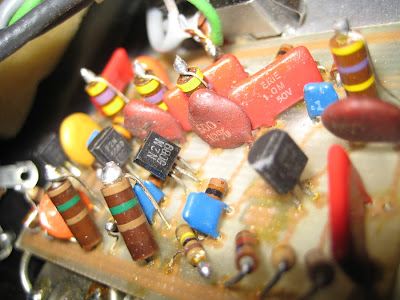 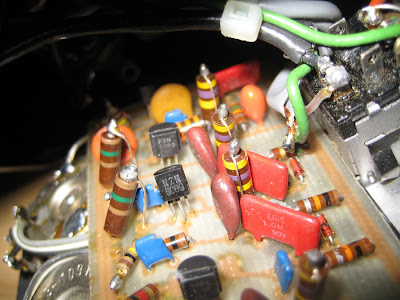 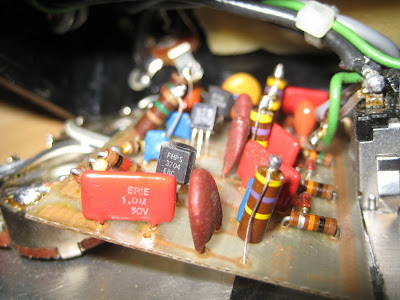 Thanks for reading!
-ed
Posted by edp at 2:03 AM No comments: