☟
Just posted up on the 'Tubes is a great demo of one of my favorite fuzzes out there, the Ibanez Standard Fuzz; now popular as the "Black Keys fuzz tone".  Although the I.S.F. is basically 92% a Univox Super Fuzz clone it still has this sound of uniqueness about it that you can't really find in any other pedal.  It's that Rubbery Sizzle-quality that I love (best achieved by plugging the Standard Fuzz line-in directly into your mixing console).

So take a listen to another great demo by friend of the blog, and author of his own awesome effects blog, Retro-Tone Junkie, Modeerf///

thanks for watching!
-ed
Posted by edp at 3:47 PM No comments:

☟
Found this demo on youtube today of the rare and wonderful Guild Foxey Lady from 1968 (a demo I had never seen, but apparently has been online since 2008... oops!), which is the same pedal as the original Axis Fuzz by Electro Harmonix (precursor to the Big Muff). 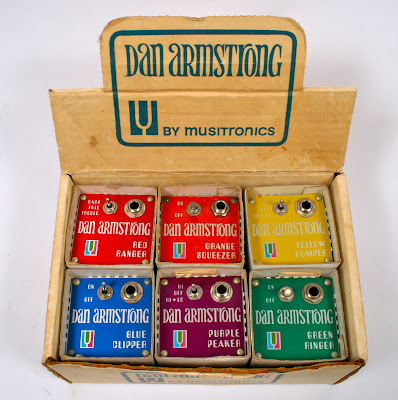 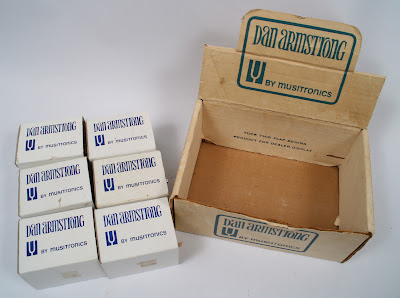 Labels: Plugin
Email ThisBlogThis!Share to TwitterShare to FacebookShare to Pinterest

☟
The fOXX Select-A-Fuzz is a crazy rare pedal from the maker of the classic Tone Machine. fOXX produced these in really small numbers during 1973, and I have only seen 3 in all my years of pedal-nerdom!

This demo comes from our friend Paine, originally posted on the D*A*M forum, and he shows off one awesome setting of this insane bastard fuzz///


stay tuned for Part 2, where he goes into more detail with each setting.

☟
Anytime a really rare pedal comes up for sale on the web, and I don't plan on personally buying it, I try to grab a bunch of photos before the auction ends.
Cause, why not?

Well this Park Auto Wah, which is THE hen's tooth of the envelope filter world, just popped up on ebay earlier, and although i would love to own it, it's just not my day ... Maybe it's yours?

The black version isn't quite as desirable as the blue, but it's still pretty awesome! 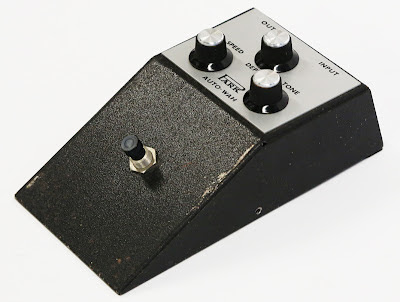 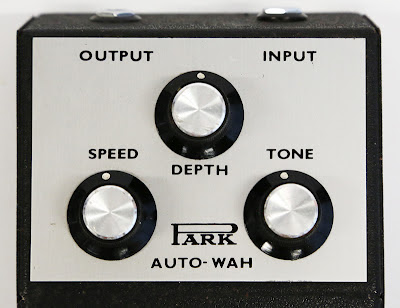 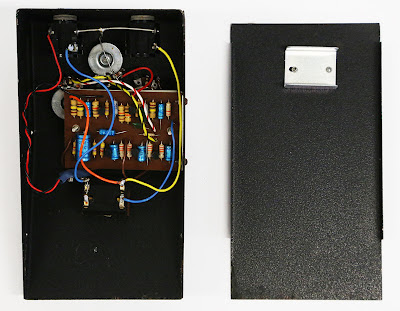 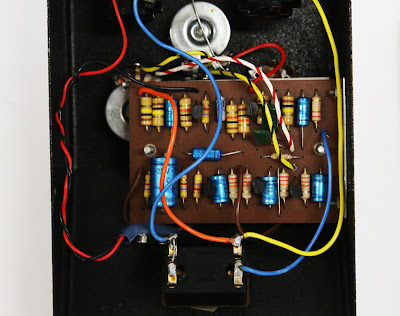 big thanks! to LAguitarshop for the fine photos/

and 'Thanks to you for checking this out.
-ed
Posted by edp at 7:00 PM No comments:

☟
For all of you Super Fuzz fans:
CLICK HERE, grab a drink, and enjoy...

So recently we got a new addition to the household;
A sweet-ass Camera!
I'll admit it, when we first got the device I knew nothing at all about how it worked or what any of the settings meant, but now I am starting to get the hang of it... I think?

So we had a little photo shoot today with one of my favorite pedals of all time, which will soon turn into its own post. ]][[
But until then, here's a small taste of the purpley madness///
-and hopefully from here on in our photos will be as top notch as possible- 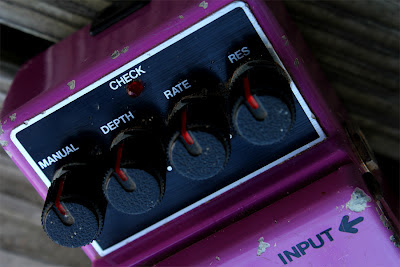 Thanks for reading!
-ed
Posted by edp at 1:39 AM No comments:

☟
2012 is quickly becoming the Year Of The Fuzzrite!
(just ask around ;)
So in honor of such an awesome fuzz flavor, not too mention one of the oldest circuits out there, 1966, we have gathered a collection of demo videos for you all to get acquainted with the sounds, tastes and feels of this little chrome polygon bastard.

please enjoy/// (some demos are recorded better than others...)

☟
So the people at Boss must have had the crack freely flowing the day they came up with the DB-5 Boss Driver. This is probably the most disgusting sounding fuzz ever made, and has been described as two trash cans smashing into each other, the sound of shattering glass, and ears vomiting...
I couldn't agree more, which is why I love it! 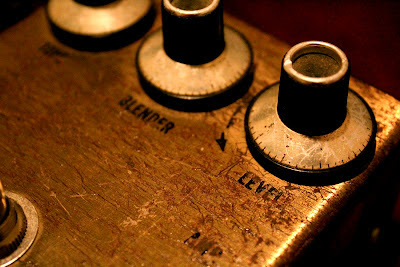 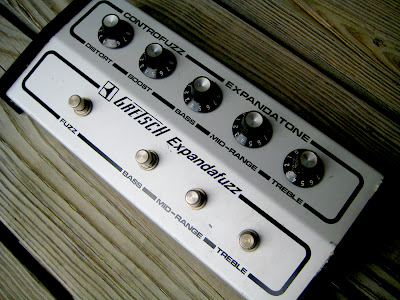 There's not too much history I can find on these badass effects from Gretsch in the early 70s, that included the Controfuzz (the fuzz portion of the 'Expanda'), the Tremofect, the Freq-faze, and the woodgrained Tone Divider.  What I do know is that in 1967 Gretsch Guitars had been sold to Baldwin Pianos, who's ownership lasted until 1981.  Making this the same time period these effects would have been around.

Although the history and facts are fuzzy, there was definitely an OEM relationship between the Italian effects company Jen and Gretsch in the mid 70's with the Playboy Series, and there is even some evidence of a teaming with Maestro on the American end of things.  Reports of a "Maestro" labelled Controfuzz, what seems to be a take on the Maestro horn logo, and the same knobs used on the Maestro effects from that time period, are really the only evidence I have but I thought it was enough to throw in and stir up the pot... 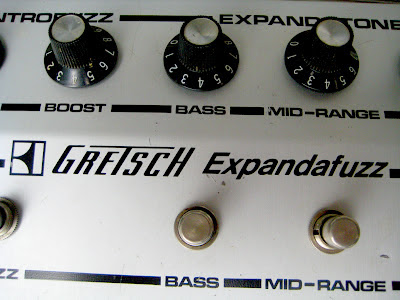 The construction of the Expandafuzz is pretty interesting.  It has a real DIY feel, and not too far off the "boutique" pedals you see today.  All of the wiring is done real clean, which was a rarity in itself during the early 70's.  The bottom plate and side panels seemed to be cut one at a time and have a hand-assembled look to them.  Not that it's surprising it wasn't built in a factory, but there's this real cool basement quality to it; with things like the drill holes on the inside panel so the board can fit correctly, or how the bottom plate doesn't quite match up perfectly, and the hand-scratched serial number on the back, all add a nice bit of character to an already cool looking pedal! 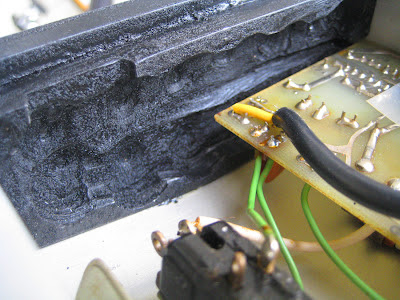 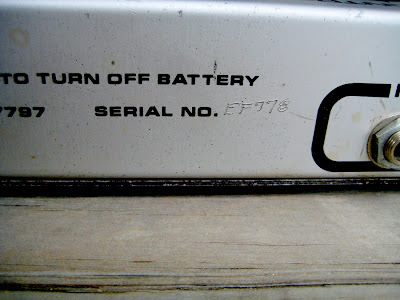 So let's get down and explain how this big boi works.  First, as you guessed it, there is a Fuzz section and an EQ/Boost section, which can be triggered in series.  The 'Fuzz' switch bypasses the effect, but you also have a switch for each EQ section; Bass, Mid-range, and Treble.  With this combination you can create some real varied tones.  The one odd thing about this pedal is that the Controfuzz section sends equal amounts of wet and dry signals.  So it sounds like 2 people playing at the same time; one Super Fuzzzed out and the other dude wailing away but completely dry.  At first thought you might feel as though this were a bad thing, and if you only had 1 fuzz pedal and it was the Expandafuzz then I would say you were right.  But since we always have more, then it allows for a wide range of experimentation.  Whether it's another fuzz you run into it, or a ring mod, or even just a Bass guitar, having the ability to hear the dry signal simultaneously with the wet can definitely be cool.   I personally love my bass fuzz with some clean signal bleeding through.  It tends to round out your heaviness real BIG./ 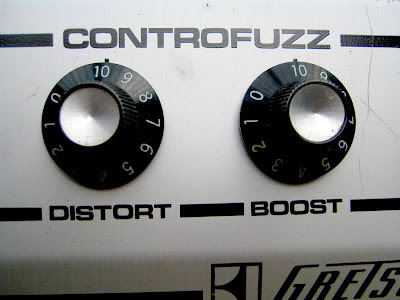 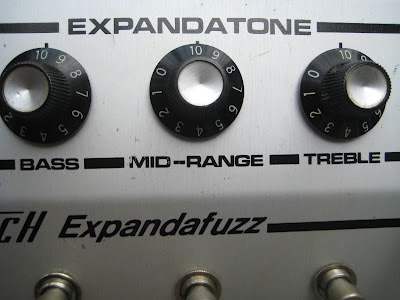 The actual tone of the fuzz is pretty cool and versatile.  As you all know by now my love stands firm with Big Muff style fuzzes, but I can definitely get down with anything gritty and grimey, so don't think my bias is too narrow.  That being said, the Gretsch Expandafuzz can do a Big Muff Tone all day! (especially when you disengage the Mid-Range EQ)  It has the fluff that I love, which is sometimes described as "Wooly" or "Creamy"; a soft edged fizz that surrounds an otherwise FAT and full tone is what the Expandafuzz does like a champ.

Another cool thing you can do with it is drop the low end and peak the Highs and Mid-Range.  This will give you more of a 60's style fuzz, but not so much so that you'll throw away your Fuzzrite or Tonebender.  But it is a cool little setting for those who want to stand out in the mix. This is definitely more in-your-face but it doesn't have quite the devastating battering ram affect like the more Muffy EQ adjustments. 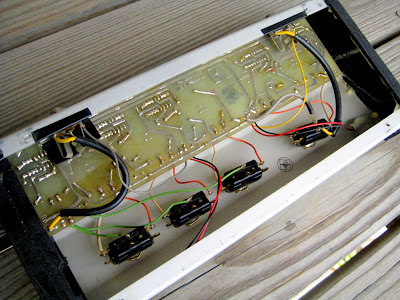 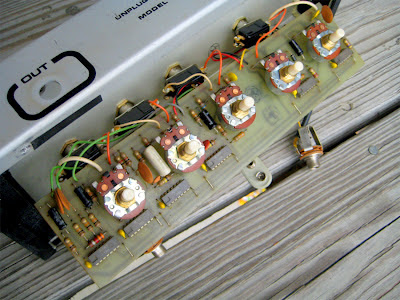 As you can see the Expandafuzz is an op-amp powered machine.  No transistor games here.  But don't let that fool you, and remember one of the best fuzz recordings of all time was done with an Op-Amp Big Muff!  It just adds to the weirdness of this pedal and puts it squarely in-line (or even a little ahead of the line) with all of the other integrated circuit-based pedals of that era.  Other than that, no real surprises inside.  So have a look-see and get acquainted with your new friend---------
the Gretsch Expandafuzz/// 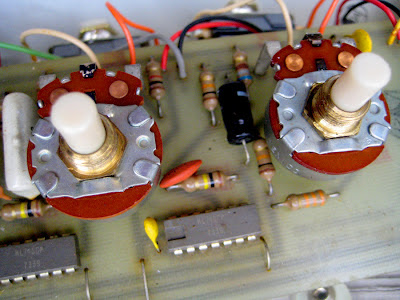 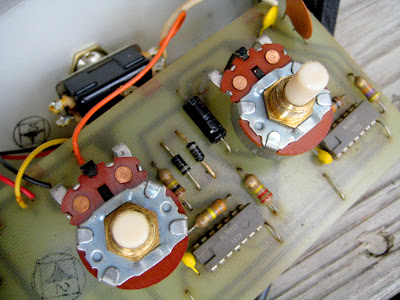 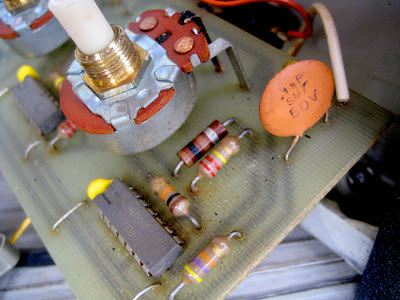 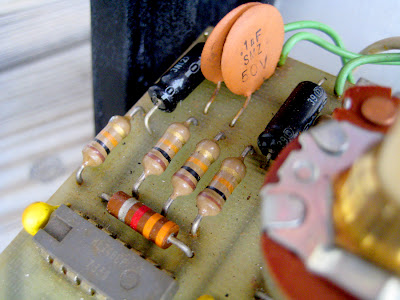 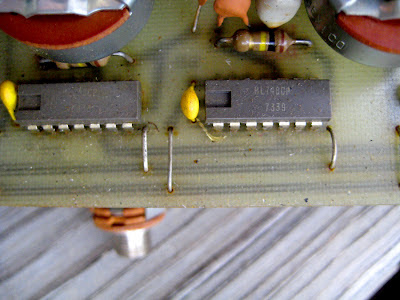 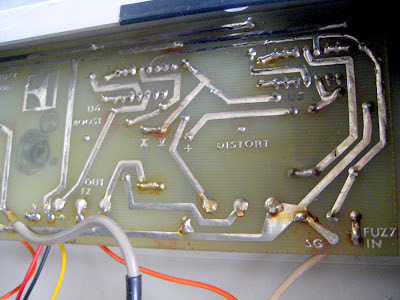 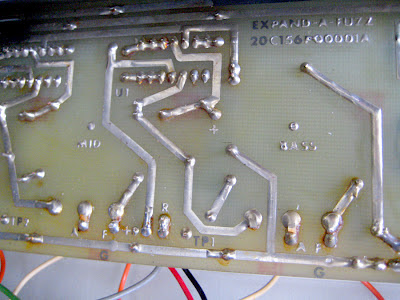 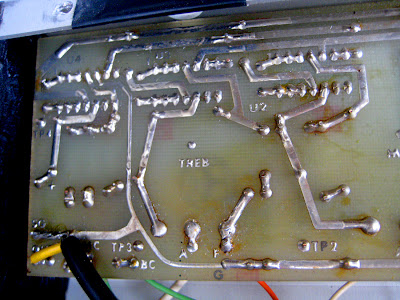 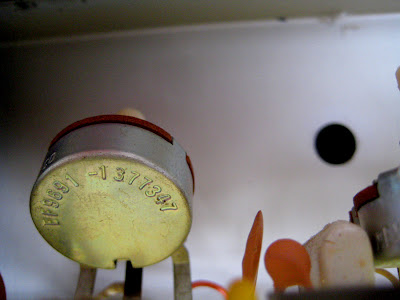 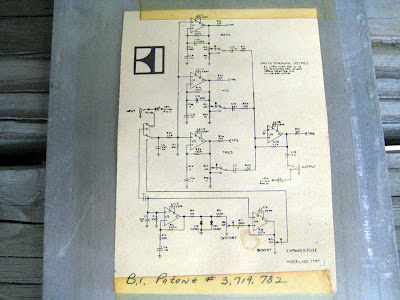 Thanks for reading!
-ed
Posted by edp at 9:53 PM No comments:

So I was checking out one of my favorite pedal blogs on the net today, http://d.hatena.ne.jp/Billl/, and came across a new post on the next issue of The Effector magazine.
Effector is apparently doing a whole spread on vintage Japanese fuzz pedals, and as you know I have a hole in my heart, and the only thing that can fill this void is vintage Japanese fuzz...

So definitely check out that blog post as there is much eye candy to be thoroughly ingested, like this: