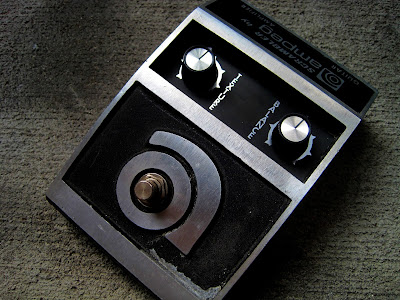 It is well established that 1969 was the year that changed everything for the state of Rock & Roll and the culture surrounding it. The popularity had grown to massive levels by this time, drawing thousands of people to stadiums and open fields to fully experience their new electric gods and sonic titans. With these large outdoor festivals abound, the artists needed new ways to amplify their tone to mammoth levels. And while the stage amplifier played the majority of that roll, to forget the importance of the fuzz box is a crime against Rock history. 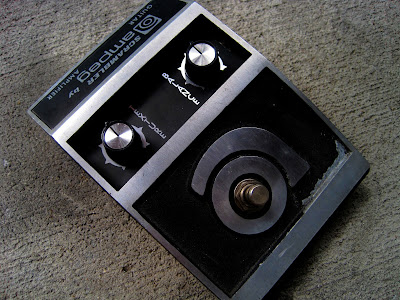 1969 saw two, now classic fuzz pedals make their way onto the scene; The Electro Harmonix Big Muff and the Ampeg Scrambler. Both had a loud and aggressive sound which was perfect for filling up any jumbo-sized arenas, and standing out among all the thin and raspy first-wave-fuzz's from a few years earlier. Although the Big Muff is probably the single most popular distortion effect of all time, the Scrambler was so unique and forward thinking that it deserves its own spotlight... 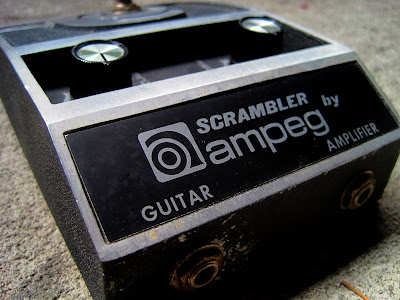 Already adept at making amplifiers, Ampeg was going for big changes in late 1968 when they set out to build "the most powerful amp ever made!". Jumping from their usual 50-watt setup to the titanic 300-watt, tube filled machine called the SVT, they were now ready for the Summer of Love. In addition to this monster, they decided to jump on the fuzz bandwagon and release the Ampeg Scrambler in early-1969. It is rumored that only around 2,000 units were produced, which took Ampeg approximately 5 years to sell completely through. These low numbers were proof that their golden fuzz failed to take flight; and whether from a lack of marketing, costly resources, or the fact that it was unlike anything else sonically, production never continued past that first run. 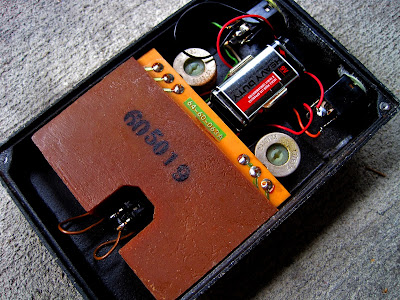 Where the Big Muff went for a fatter, thicker amp-like tone, the Ampeg Scrambler boasted a huge upper-octave fuzz circuit. And although similar fuzzes were available by 1969, including the Univox Super Fuzz, the Octavia by Roger Mayer, and the Fender Blender, none had the overall raw character or versatility of the Ampeg Scrambler. With the ability to go from a burly Muff-style overdrive to an all out octave splatter fest, there really was nothing like it. And even though many guitarists of the time were not swayed by the serpent's tongue, one band luckily latched on and make it their signature sound. This band was Cactus. 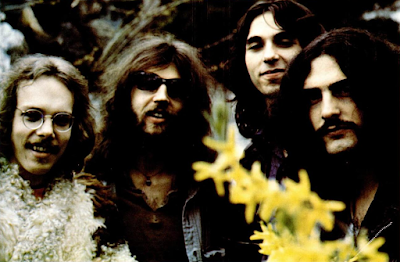 It is unclear when Jim McCarty of Cactus decided to pick up an Ampeg Scrambler, but around 1971 the fuzz starting making an appearance on their albums and a heavier showing in their live sets. This slowly became the "Cactus Sound", and with songs like Evil, Long Tall Sally and Bad Stuff, which all featured various degrees of the wild and raunchy pedal, it was no wonder why, even to this day, the original Ampeg Scrambler is such a sought after effect.


There are only two controls for the Scrambler; "Balance" and "Texture" . Balance affects the mixture of clean tone to fuzz tone, and Texture controls the gain. With many vintage fuzz pedals the gain knob usually starts off at zero to little fuzz and as you turn it, the amount of fuzz increases. But with the Scrambler the more you turn up the gain, the more octave and "splat" you hear. The real secret about this pedal is that at low Texture levels you can easily produce a nice, fat, chord-friendly fuzz. It's just when you start to turn it up that the real insanity begins. At the highest gain levels, it has been compared to the sound of shattering glass, a giant mosquito, a broken garden hose and even an alien laguage? All of these are surprisingly accurate! 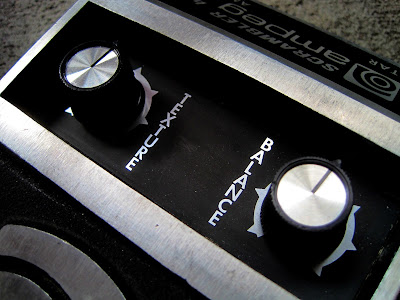 For more than 40 years the secret truth behind those scrambled death-tones lies hidden under a thick brick of epoxy, cloaking the full detail of what is really going on in there. Yes, the original Ampeg Scramblers were "gooped"! The strange thing is that the pedal schematic was available by request from Ampeg when they released it in 1969, so who knows what they were trying to hide? But as is with most schematics, there are so many variables to consider that I have yet to hear a completely accurate clone. Ampeg themselves decided to reissue the pedal with a small run in 2005, but still fell short of the subtle nuances at lower gain levels and the fat bottom end which made the originals so perfect. 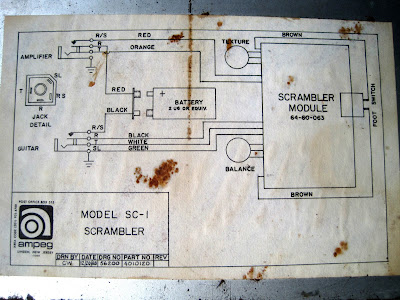 The vintage Ampeg Scramblers are still rare and don't often come up for sale or auction. With an increase of appreciation for their uniqueness and usability over the past 10 years, prices currently range from $500 (on the very low end) all the way up to $1,200. And even these numbers have come down considerably from just a few years ago when they would often sell for $1,500 to $2,000. And although that initial infatuation may be over, the Ampeg Scrambler's solid foot in stompbox history is still pretty good for some heavy cast-metal fuzz box that nobody wanted to play with back in 1969.

Ok so I have been way out of the loop for the past... well, couple years.
But the thrill is back and so is that fuzzy itch!

In honor of all things obscure and raunchy, here's a video from the man Jerms, demoing 2 Knight Fuzz's
(like we posted about here: Knight Fuzz Box KG-389):

These babies came from a mail order build-it-yourself kit, I'm guessing the mid to late 60s?