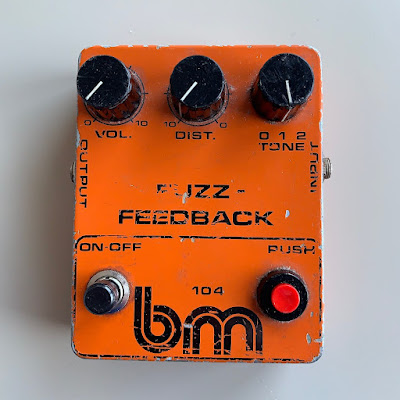 In May of 2021 I couldn't believe I was actually seeing an online auction for this pedal; one that I have been endlessly searching for, for just about 20 YEARS... This is the BM 104 Fuzz-Feedback, it is awesome, and it is finally mine.

Long thought to be made by the other (and way more) famous B&M / Barnes and Mullins, it had otherwise been a bit of mystery as only a single photo of it existed on FXDB and no info. But now that I have it I'm not so sure who made it, what country it was made in, if the circuit is a modified version of something else, or exactly when it was made. So I have a bit of digging to do before I can write a full article.

But, I can say with a high amount of confidence that it does predate the BOSS DF-2 Super Feedbacker & Distortion by at least 5 years, and maybe more. It also functions a bit different than the BOSS, and sounds wayyyyyy better! Probably my favorite aspect of this is that the feedback is set to be triggered by that red momentary switch, so as long as you hold it down, you get feedback in the signal. But what makes this truly unique and special is that the feedback seems to not only stay in tune, but also starts off as a quiet oscillation and then builds in volume and intensity as you hold down the switch. Amazingly it somehow never gets too abrasive and stays musical even at its loudest!

So if any of you have additional info on the BM 104 Fuzz - Feedback please let me know! And if you happen to own one yourself, definitely reach out as I would love to compare the two and see if we can find any clues to its origin.

Thanks for reading!
-ed
Posted by edp at 2:21 PM No comments:

☟
Just found this demo for the super rare fOXX Power Machine plugin from the early 70s. What a cool sounding drive!
The craziest thing about these, that you can't really see in this video, is the enclosure... It's like a small metal recycled flimsy snuff or coffee can disc with a bottom plate that was literally just a thin piece of plastic, or sometimes even cardboard, cut into a circle. 😂 The one I have is so fragile that it's amazing any of these survived!

It is unknown how many of these were made, but from what I can tell they came in Red, Blue, Black, and Purple. So there's at least 4 different units out there (but we're probably looking at somewhere between 15-100).

Check it out in all it's boosty and overdriven glory! 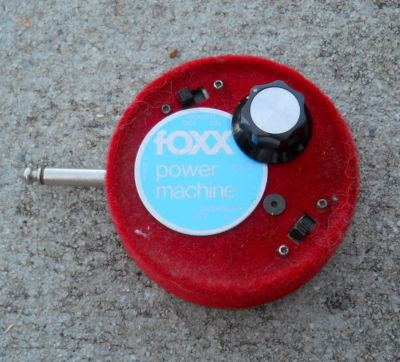 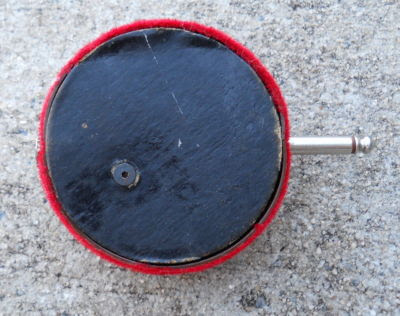 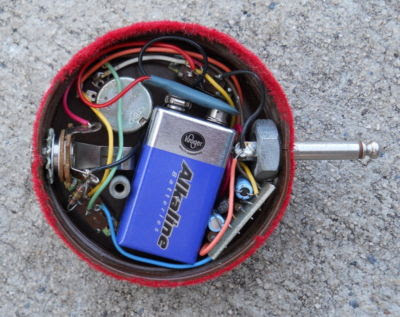 Thanks for reading!
-ed
Posted by edp at 9:00 AM No comments: 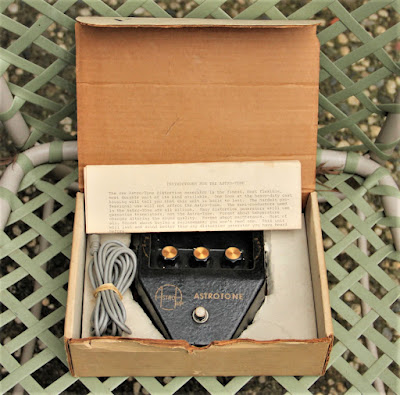 So lately I have been digging through some old photos and came across these; an amazing example of the super rare and legendary distortion pedal, Astro Amp's "Astrotone" (by Universal Amplifer Corp). Somehow this pedal survived all the way through the mid-60s and into the 2020's, where I assume it now resides in some other pedal nerd's collection...

Probably the most interesting thing about this is what we can read from the instruction manual and it's emphasis on the fact that it uses silicon transistors instead of germanium; Temperature Instability? NO MORE! I'm not sure how common this was for music gear in 1967, but it does seem like a legitimate selling point. I'm also into the final hyperbolic sales pitch that states the pedal "will last and sound better than any distortion generator you have heard before!".

Thanks for reading!
-ed
Posted by edp at 5:35 PM No comments: 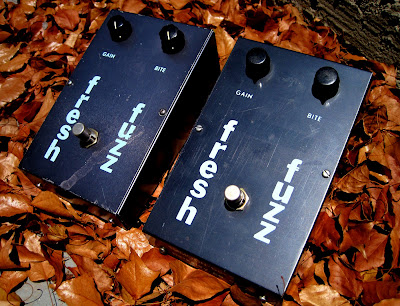 It's 1973 in Berkeley, California and a young electrical engineering wizard named Craig Anderton has just designed one of the earliest examples of an envelope filter pedal. He calls it the "Funk Machine", and together with John Lang, starts an innovative and experimental guitar effects brand, Seamoon Inc. Hand-building each individual unit, they launch their new brand with that single pedal and quickly word starts to spread.
Fast forward a few months; Anderton decides it's time to expand, and with that he develops Seamoon's own version of the now classic fuzz effect, with a twist...

Over the years the Seamoon Fresh Fuzz has been discussed, debated and dissected by every pedal nerd on the internet, but it's never been fully understood because so few people have actually held one in their hands. It's legendary status comes not just from its rarity, or its origin, but also from the fact that it was a favorite of Boston's Tom Scholz and has been used extensively by Eric Johnson.
Somewhere at sometime someone wrote a review about the Fresh Fuzz stating (incorrectly) that it was "thin sounding", and as rumors tend to go that misrepresentation has been repeated so many times that, to this day, virtually anyone you meet who has heard of (but not actually heard with their ears) the Fresh Fuzz will automatically say, "Yeah, aren't those pretty rare? I heard they're real thin sounding though."

Which brings me here, to my own personal mission;
Clear the good name of this legendary and groundbreaking stompbox once and for all, and lay to rest this distortion of the truth, bringing to light the real legend of the Seamoon Fresh Fuzz! 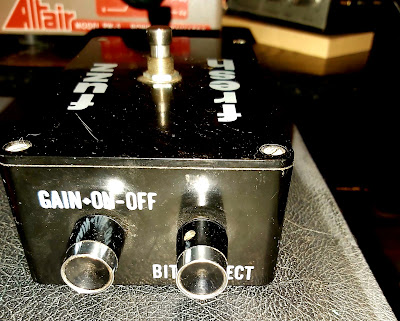 Originally built in a plastic Bakelite project box, the Fresh Fuzz was one of the first distortion units to substitute an operational amplifier (op-amp) for the typical transistor-driven fuzz. This allowed for a massive volume boost that no other pedal had at the time. Excited guitar players quickly snatched them up, but were unfortunately met with a crushing realization when they actually stomped on one as the delicate pedal would shatter into a million pieces! Anderton quickly abandoned the plastic box and switched over to the slanted metal casing we all know today, keeping the circuit untouched. These original units had a sound that was closer to a classic low gain distortion with a nice breakup (think ProCo Rat with less gain) than a buzzing fuzz. With a big beefy low end, and a smooth amp-like crunch, the V1 Fresh Fuzz really changed the game. But as new innovations tend to confuse the masses, people didn't get it. And after just a few months in production, Anderton went to work on a redesign. 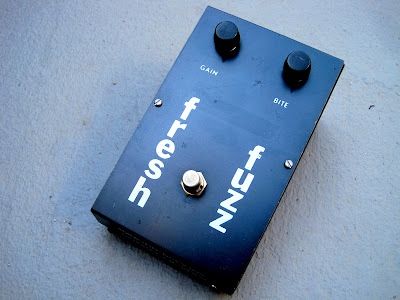 The V2 Fresh Fuzz rolled out at the beginning of 1974 and employed a dual 4558 op-amp, thus doubling the power of the 741 chip used in the original. This created an even larger gain in volume and some real deal fuzzzzzz. Most people prefer the sound of this version for it's versatility and overall tone. And this sucker was LOUD, and gritty and everything you could want from a pedal. On the spectrum of available fuzzes at the time (Maestro Fuzz Tone on one end, Electro Harmonix Big Muff on the other) the Fresh Fuzz would definitely lie closer to the Muff side, but it did have some of the great characteristics of those earlier boxes too.

It is unknown just how long they were made, but by 1975 the look and feel of Seamoon started to change, and less than year later Craig Anderton left the company. So the best guess is that the Fresh Fuzz was around for approximately 2 full years, with the V2 being in production for most of that time. It is hard to say just how many are out there, because this unicorn of a fuzz pedal is just so damn cool that people tend to hoard them! My personal quest took more than 8 years before finally finding both versions within three months of each other. I have only seen 2 of those original plastic Bakelite box units, 4 of the V1's, and maybe twenty to thirty V2's. So they are out there, but I like I said, I just have a feeling that not many people are ready to give theirs up.

I hope this will finally lay to rest the "thin sounding" fallacy that has been unjustly laid upon the Fresh Fuzz. In fact, there is a great demo online of 741 op-amp version that shows just how big, tough, ratty, and gnarly they can get (We posted it HERE a while back). So let's come together and bring to light this wonderful relic of fuzzdom, and repeat after me:
"The Seamoon Fresh Fuzz, yeah I hear they sound like a an ancient monster rising from the depths of HELL!!!"
V1 circuit: 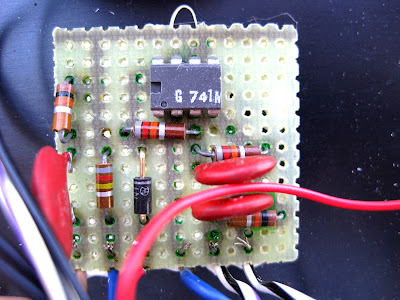 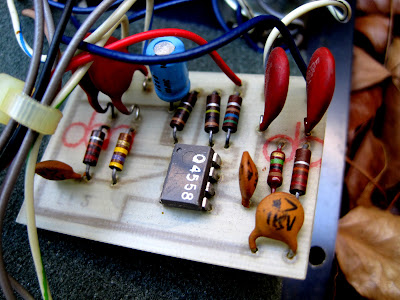 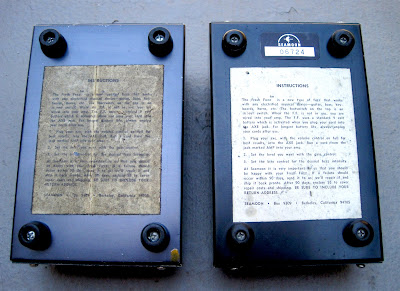 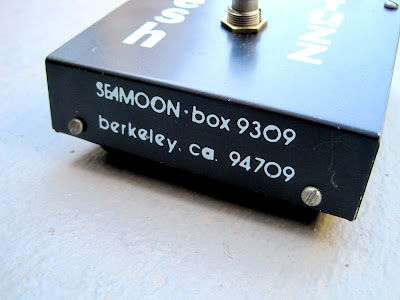 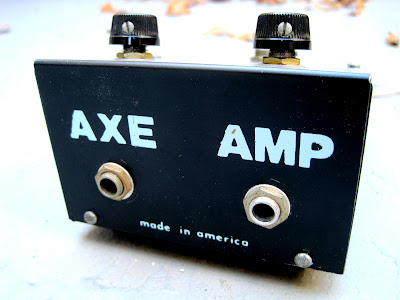 (*This article originally appeared in Gearphoria magazine July of 2015)
thanks for reading!
-ed
Posted by edp at 8:05 AM No comments: 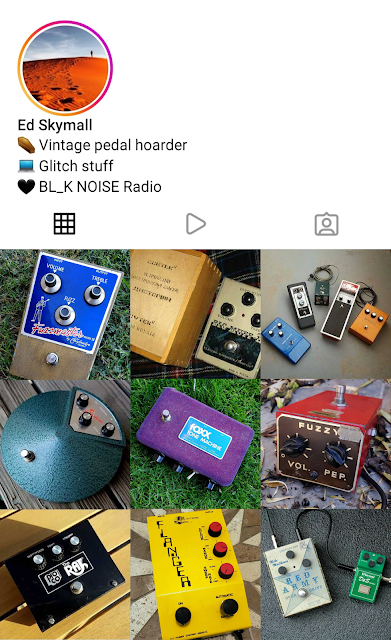 After a six year hiatus, and battling with being blocked from all social media platforms (for apparently no reason), we are finally back!!!
I want to first thank everyone who had reached out over the past few years, and anyone else who ever followed, read, or shared what we did here over a decade ago! It blows my mind that I still see people citing this page (for better or worse 😂) in their for-sale and auction posts.
The vintage pedal collecting world has definitely changed in that time, which is weird as hell to even write, and places like Instagram and YouTube have propelled the hobby to an insane level of popularity.
I myself essentially moved and scaled down the blog to my own Instagram page ( Found HERE ). So yes, I'm still collecting and still nerding-out on these crusty old boxes of joyful noise. But there's only so deep I can go on an IG post, and only so much you'll read in one! So I have decided to resurrect the blog and just see what happens.
I have a bit of cleaning up to do as many of the old posts now have dead links and some info that probably needs updating; but other than that, it's going to be back to what we always did here (with some new ideas thrown in the mix)...
So thanks again, and we'll see you in a bit!
-ed
Posted by edp at 10:25 PM No comments: