Ride the spiral through... 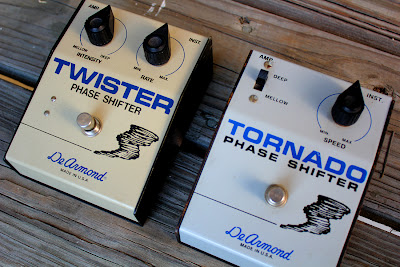 About 25 years before the fuzz pedal was born guitarist Harry DeArmond had jumped into the music world with the first commercially available attachable pickups.  DeArmond (and Rowe Industries) then followed up this success by  introducing guitar players to foot controlled effects units!
First out was the DeArmond Volume and Volume/Tone pedals, next was the now classic mechanical tremolo, called the Trem-Trol.  DeArmond road the volume pedal train for years until the early 70's when they decided to branch out a bit more.
With a redesigned case, also used by various other brands like Maestro, the early 70's line of DeArmond effects included the Weeper, the Pedal Phaser, the Optical Volume Pedal, the Thunder Bolt Fuzz/Wah (the evil twin the Tycobrahe Parapedal), and their first true distortion device, the Square Wave Distortion Generator. Then, in 1977 DeArmond decided to take its next que from Electro Harmonix with their Small Stone-inspired pedal called the Tornado Phase Shifter. 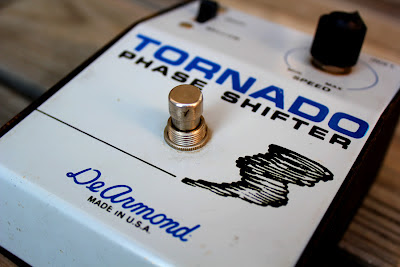 The DeArmond Tornado took the controls and convenience of the Small Stone and doubled down on the tone. Now don't get me wrong, the V2 Small Stone from the same time period is one of my all-time favorite phasers, but it has nowhere near the depth, warmth and liquid-like qualities the Tornado has. But just like the Small Stone, the pedal is pretty easy to figure out and get into; we have 1 knob for Speed and 1 switch for Depth; and the real magic of the Tornado lies deep inside this switch... 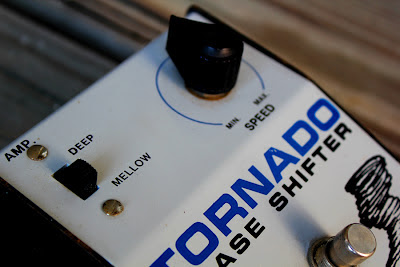 The "Mellow" depth setting is just that, it has close ties to an MXR Phase 45 type tone, but with way more character and jet-taking-off capabilities. The "Deep" setting is a complete 180° from the "Mellow" that I can't really compare to any other phaser (except the DeArmond Twister), because it honestly sounds like no other phase shifters out there! It's just insanely fat, full, rich, and funky too.

The Tornado excels at reeeeeaaaallllyyy slooooowwwww and intense phasing. I haven't timed it myself, but I would guesstimate that the full travel of the sweep is around 30 seconds long!!! Compare that to the normal 5 to 10 seconds of most phasers and you have a real mind-melting effect here. On the other end of the Speed knob though, it never really gets that fast. You can still achieve a good little warble, but if you are looking for crazy alien FX, the Tornado might not be for you? 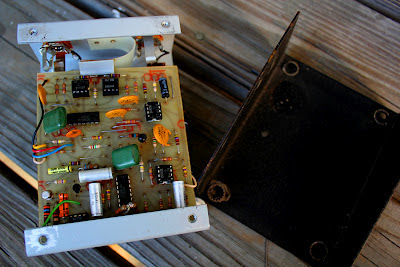 One thing to note about the Tornado; So this is actually the 2nd one that I have come to own. The first one sounded nothing like this guy and even had a few different components inside. It was from 1978 and just sounded weak in comparison. Now there definitely could have been something wrong with it, a bad connection, or capacitor, or something, but I do know that it didn't get nearly as deep as this one. I only mention this because if you happen to come across one of these, you may want to request some gut pics before you decide to buy. (I really need to find my photos of that other one!)

Well 2 years of Tornadoes had passed and DeArmond decided to expand on their phasey ideas, replacing that depth switch with a more precise and user friendly knob. 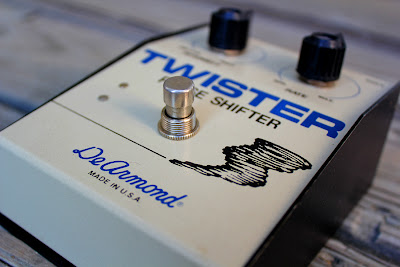 Designed to give the player more control over his sound, and maybe even DeArmond a leg-up on Electro Harmonix with their Bad Stone?, the "Intensity" knob offered all of those in between tones not available with a switch. Although this main feature was really the only "upgrade" from the Tornado, it was just enough for the Twister to become fairly popular in its day. I am not sure exactly which years DeArmond was making Twisters (I would guess 1979-1982), but I do know that they produced quite a bit more of them than Tornadoes.

The overall tone of each is pretty much the same, but there are a few differences we can discuss. Obviously with the added knob for depth you can achieve a much wider range of tones with the Twister. Maybe you want more than a Phase 45-type sound, but not all the way to the mind-melting toxic ooze of MAXIMUM INTENSITY. So the knob allows you to dial it in to taste. 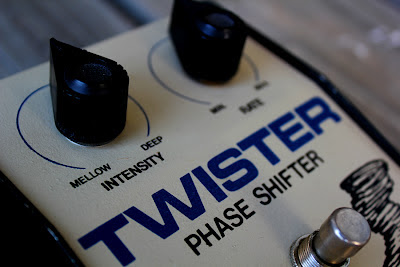 Another key difference is where the phasing sits sonically. The Tornado hits much lower and has an overall thicker response. It works really well with Bass and doesn't chop off any of your lower frequencies. On the other hand, the Twister gives you a beautiful midrangey swirl that never dips down into those sub-tones. I have found that each phaser has its own place in the mix; and although I personally prefer the range of the Tornado, there have been times when adding it in has muddied up everything else, making the Twister a necessity.

The final point of variation is in the speed of the two; the Twister does not get nearly as slow as the Tornado. It is more like what one would be used to with the classics like a Phase 90 or Maestro PS-1. In contrast, the Twister does go extremely fast! Much faster than the Tornado and even faster than most people would find a use for, but I can see it being real cool in a live setting where things are getting crazy and you are down on the ground tweaking the hell out of the "Speed" knob trying to sound like a Moog on fire! Or, if you add a cool filter and some fuzz, you could pull off that warbling vinyl sound.?. 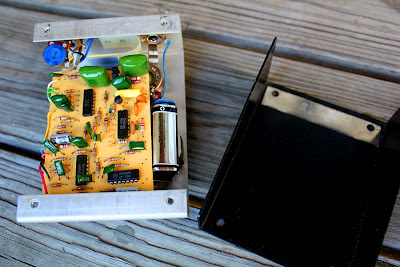 Both of these whacky toys are exactly what makes pedals from the 70s so awesome; Goofy names, cool colors and space sounds! Teaming them up with some fuzz really opens the audio spectrum and brings you back to a time when having a phasing guitar solo just made so much sense...

If you search, you can still find both of these at online auction sites and local CL listings every once in a while. The Twisters are more common, but both are still fairly rare. I highly recommend tracking down at least one, if not both, for any phaser junkies out there. Trust me, it's a flavor you do not yet own!

now, for your nerd pleasures/// 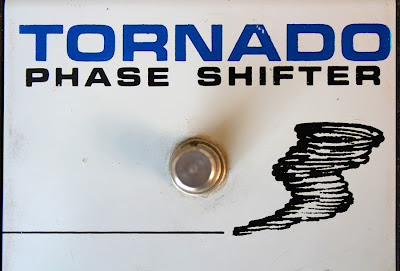 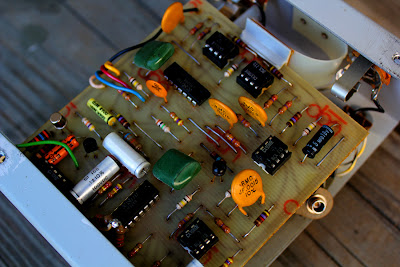 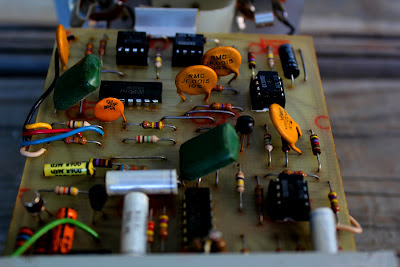 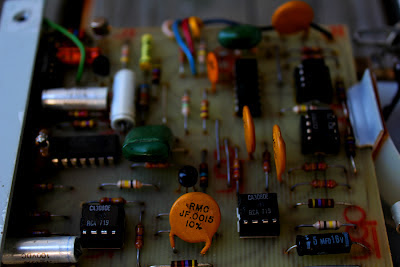 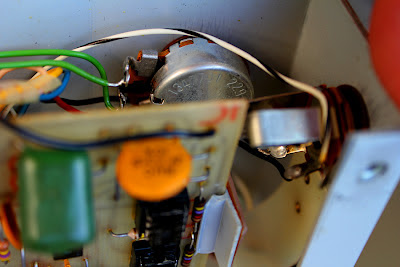 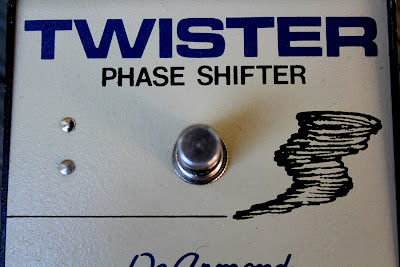 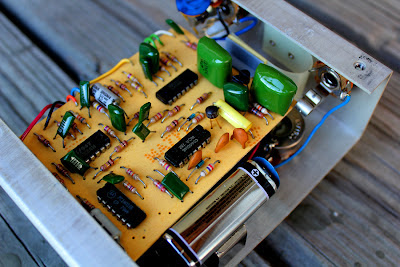 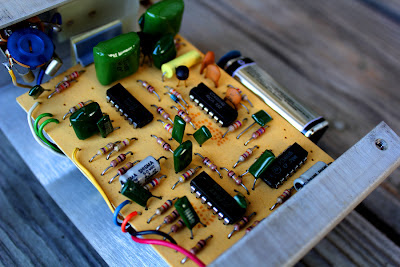 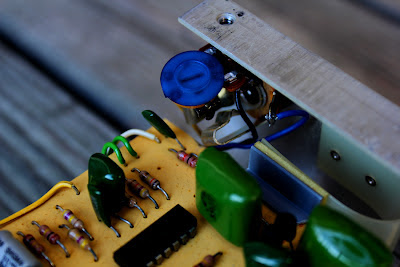 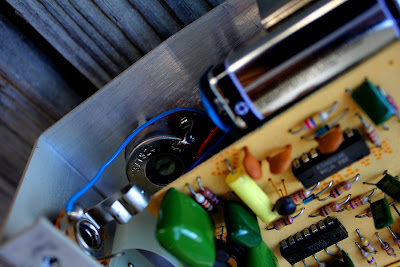