In Search of the Australian Fuzzmaster...

☟
I'm writing this post in hopes that we can finally unlock more info on the rare, illusive, and fairly mysterious Claybridge Fuzzmaster series... 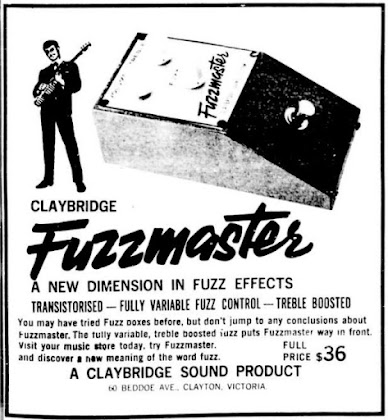 'Claybridge Sound Systems' originally started out (most likely in the early 60's) making PA systems out of Clayton (a suburb of Melbourne), Victoria, Australia. Builder, Ralph Bridges, then pivoted into making tube guitar amplifiers shortly afterwards. *As of now, no surviving amps or PA systems have surfaced from Claybridge, but there are multiple accounts of them existing from past owners and people involved in the company.

In 1966 (which we can infer from the above advertisement taken from the September 1966 edition of Go-Set magazine, and also a few of the components inside) he released his first fuzz pedal, a 3-silicon transistor (2N-3565) unit called the "Fuzzmaster". It came in a beautiful wedge enclosure with a green hammerite paint job and deep cherry red knobs. It's sound is closest to a Big Muff, but with the raw and unhinged nature of a MKI Tonebender. Circuit-wise, it shares characteristics with the Fuzzrite, but that's about where it ends.

Other than this, we know very little about it. As far as I have seen, only two units have ever surfaced. They came onto my radar around 2009, and I have been on the lookout ever since... Not one has popped up for sale in that time. 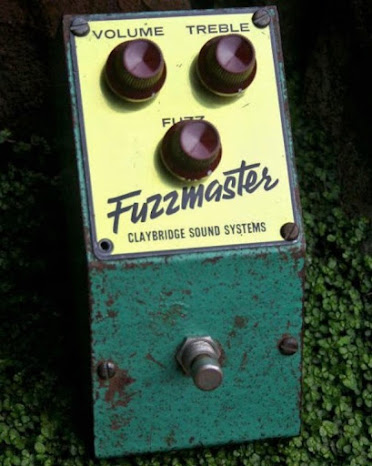 Some vague rumors have suggested that there is a Fuzzmaster Amplifier that Claybridge made, although I have never seen a photo of one to confirm, nor do I know if it came before or after the green Fuzzmaster pedal. So let's just move on, shall we!
Ok, next up is the "Fuzzmaster Wildcat". Another 3-transistor fuzz, with a somewhat different layout and components; most notably the transistors themselves (BC-109).
I don't have much information on this one, and just the two low-quality photos that you see below, so a breakdown of the circuit is still up for debate. But it is interesting to look at this unit and notice a few important cosmetic alterations to the original: first, the change from "Claybridge Sound Systems" to simply "Claybridge" inside what looks like a little pick logo. Now this does potentially screw up my theoretical timeline I'm working on, but hear me out... Ok, next is the enclosure, which is similar to the MKIV, but it appears to be more rectangular in nature, as is the metal plate with the logo. It still has a nice hammerite paint finish, but instead of green it's a deep black with that light blue face plate. Also it's interesting to see the change in knobs, that you'll find on the MKIV's as well. Finally, is that odd name change; the "Wildcat" which I'm assuming is a reference to The Ventures song from 1966, even though that has no fuzz on it, The Ventures had broken onto the Australian pop charts as early as 1963, so it's not out of the realm of possibility that Ralph Bridges was trying different schticks to market his fuzz boxes and thought this would do the job?
The knob/controls layout stayed the same, and the Fuzzmaster logo itself stayed the same, and while Bridges did not include the logo of the guy playing the guitar on the original unit, it was on the 1966 advertisement, so that's not a particularly odd or unlikely addition. When it comes to the circuit, what stands out the most is that the third transistor is actually situated on the "Treble" control pot. I can only assume that this is the "Treble Boost" function that the original advertisement was referring to? Without better photos it's really difficult to tell if this is the same circuit as the original Fuzzmaster, but if any of you can figure that one out, definitely let me know! 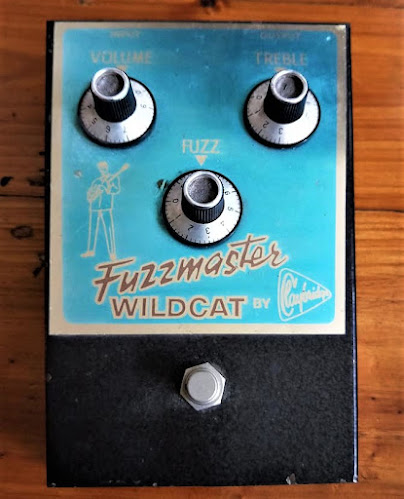 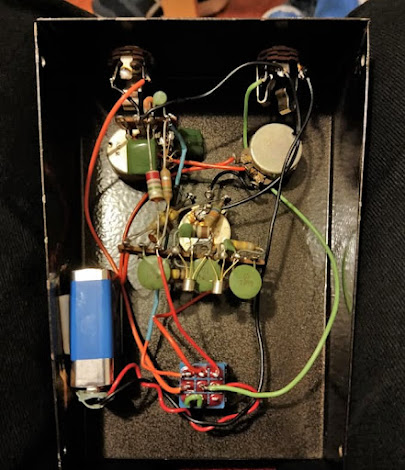 Lastly is the Fuzzmaster Mark IV, which I happen to own a unit myself. And while this is the most common version, it is by no means anywhere close to readily available. I have seen only 6 of these pop over the years, 2 in gold and 4 in silver.
Now, this version is where things start to change a bit. The circuit inside goes from that 3 transistor style to a 2-silicon transistor (BC337) fuzz; removing that additional transistor on the Treble pot. Again, taking inspiration from the Fuzzrite, but with more low and midrange available. The sound is really nice! It's not too dissimilar to a Rosac Distortion Blender, which is basically a Fuzzrite that gets beefier than normal, but overall it's more raw sounding and unique. Actually the best way to describe it, and this is going to sound like a weird comparison, but try to imagine an Ibanez Standard Fuzz, with no octave, and a bit of that FZ-1/MK-1 gating, and you're beginning to get closer to how this thing really sounds! It definitely sits right in the realm of that classic 60's fuzz tone, but with a unique twist.
As for the enclosure, it's more of a trapezoid shape than the previous two pedals, but just like the Wildcat, it sports the same metal faceplate and knobs. You'll notice the Claybridge logo has changed, again. Abandoning the idea of the pick image, and going for a cleaner text that simply says "by Claybridge Sound", Bridges really seemed to be trying to find the perfect combination of words and imagery. The little guy playing guitar is still present, and the knob/controls layout has remained the same, but the distinction of Mark IV (which most likely predates the Tonebender Mark IV by a few years) is there to let us know that this is something NEW! 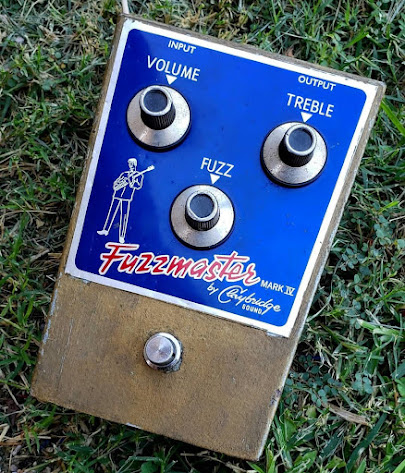 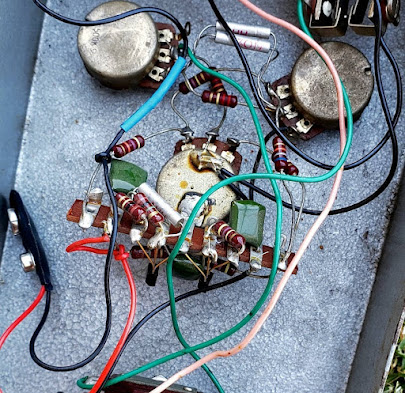 Now, to address that "Mark IV" statement.
Fuzz pedals from the 1960s are already relatively rare. Fuzz pedals from Australia and from the 1960s are extremely rare! And while we have been able to find photos of three different Fuzzmaster versions, it is highly possible/likely that there are more that have just never surfaced. What we do know is that each version seemed to come fairly quickly after one another, with the v1 and the Wildcat looking seemingly close in design and component choice. But what is unclear is if there was a missing link, Mark III(?), that came in between the Wildcat and the Mark IV.
By the time the Silver MKIV came out Claybridge had begun putting serial numbers on each unit, which sheds some light on just how many were possibly made. The below pedal is numbered "467", which is currently the highest serial number I have seen so far. I would wager that these came after the gold units, as those tend to not have the serial plates and have shown up in lower numbers overall. 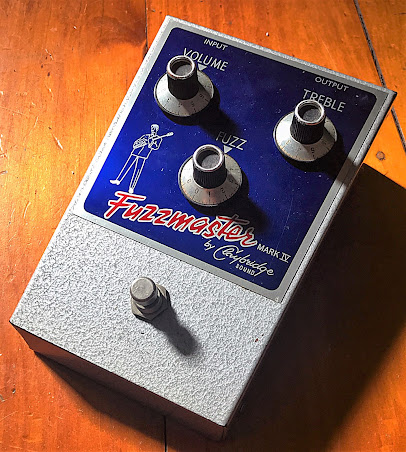 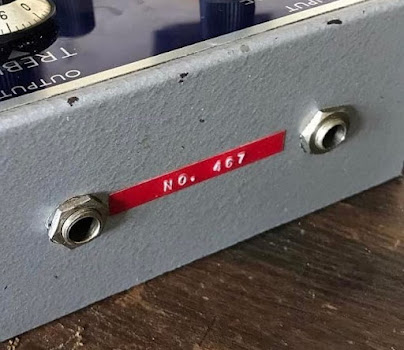 By 1971 Bridges had again changed his company's name and image, going to "Claybridge Audio", as is evidence by the below advertisement from a March 1971 edition of Electronics Australia magazine.
Also, interestingly, he either abandoned the Fuzzmaster by then or just wanted to spotlight a new product, the Solid State Treble Booster (which I would love to find!). Another cool thing about this ad is that it shows what looks like a front panel to one of the Claybridge PA amplifiers, and also boasts a new and larger show room! So I can only assume that things were going quite well for Claybridge Sound, I mean Claybridge Sound Systems, er, I mean Claybridge Audio by 1971. 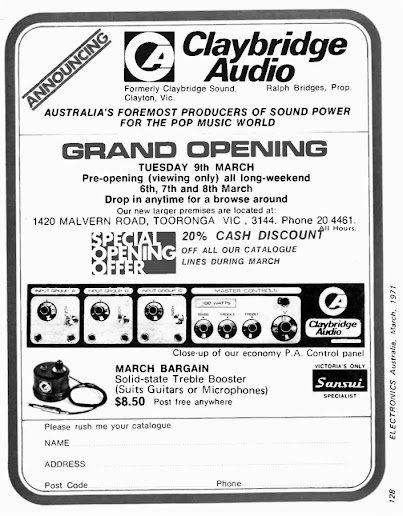 After doing the digging for this writeup and going through everything I was able to track down, what I see is the story of a talented builder who struggled to find his "brand" and his place in an emerging industry. Like so many of us who create, he has a product he believes in but doesn't quite have the skill to market his ideas for mass appeal. So we get what we see here; someone trying out new concepts, new logos, new framing, labels and identities with each successive product release, all within a span of just 5 to 6 years. But ultimately failing, with reports of Claybridge finally going bust over money wasted on radio ads that had little to no impact on sales.
So I'm not sure how long Claybridge existed, or how many pedals were produced, but I can bet that Ralph Bridges never would have thought that almost 60 years later some guitar pedal nerds would be meticulously scouring photos and articles trying to find any morsel of information about his awesome and timeless creations.
If you happen to have any additional details not discussed here, or have an original Claybridge unit, please reach out to me via email or instagram.
*Check out Part 2 here for way more history, details, and a few corrections to this article.
Thanks for reading!
-ed
Posted by edp at 12:15 AM