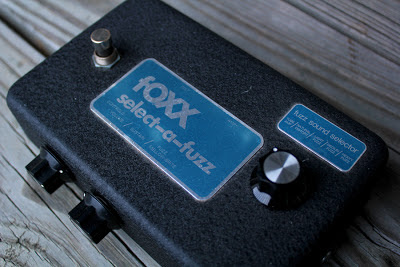 As you may recall, in a couple of past posts we highlighted demo videos of the impossibly rare fOXX Select-a-Fuzz. From those posts you can hear that it's as thick as a whale and sounds sort of similar to its older brother, the fOXX Tone Machine.

I honestly never thought I would come across one of these for myself; until that fateful day when our video demo'ing friend actually contacted me and asked if I would like to acquire it from him! I didn't have to think about it very long (obviously). So fast forward to today and here she is... One of the most insane fuzz pedals I have ever played and am extremely happy to have as a new part of the family here, at Casa del Ed. In 1973 fOXX was riding high on their success from the Tone Machine and decided to experiment with a new fuzz pedal, one that could be used in many different settings and was capable of a much wider range of sounds than its predecessor. So with a little ingenuity the Select-a-Fuzz was born.

Unfortunately other than that, there is not much information about these rarer-than-rare pedals. But a few things I do know are that
A: very very few were made,
B: the three I have seen all have the date 7-11-73 printed on the circuit board, and
C: they came in 2 colors, black and purple fuzzy. 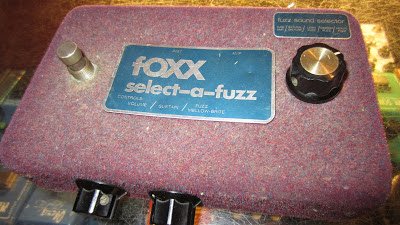 I do apologize for the short history section, if I find out any more info I will update this post!

But let's get into the details, shall we?
OK the knobs are controls for Volume, Sustain/Mellow-Brite, and the Fuzz Sound Selector. The Volume is pretty obvious in what it does, but the Sustain knob serves triple duty! It actually does increase the gain, but it also affects the length of the sustain and simultaneously brightens the signal. It's really quite unique. The Fuzz Selector knob is broken up into 5 different settings; Tube Amp, Natural Distort, Light Fuzz, Medium Fuzz, and Heavy Fuzz. We'll get into each of those in a bit, but first let's talk about that sustain.

This is where the hidden magic and versatility of the Select-a-Fuzz comes into play. The Sustain knob really lends itself to completely changing the tone of the fuzz setting from one extreme to the other. All the way to the left it cuts the sustain down to a nice gated and raunchy sound, no too dissimilar from an MKI Tonebender. But as you turn the knob to the right it begins to fill the speakers with this thick wall of doom, adding bottom end and high end at the same time, this is where the gain is heavily increased along with the sustain. At this setting the gating is still present but only at the very end of the notes.
It just all adds to the craziness of this fuzz.

One thing to mention about the Sustain knob, when it's turned completely clockwise there are not quite as many discernible differences between each Fuzz Selector setting. But with it dialed in closer to the lower gain/gated tones you can clearly hear each individual setting and their nuances. 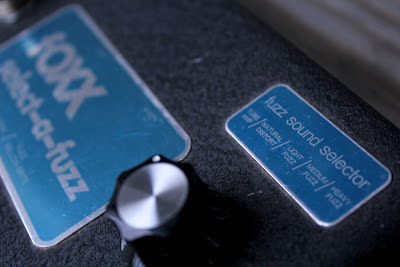 So like was just stated, and what was evident from the video demos we posted a few months ago, at the higher sustain/gain settings you cannot hear quite as much difference in tone when switching through the Fuzz Sound Selector knob. So when discussing each setting I will mainly be focusing on the sounds you get when the gain knob is all the way down to the left.

So first up is the Tube Amp setting:
The Tube Amp setting is, although the lowest gain'd, still a chewy and squelching primal machine. It gates, it spits, it farts its way through the speakers and into your ears. It really does stand up with the best MKI Tone Benders I have heard. As you turn the Sustain/Gain knob up, the sound begins to fill out a bit with the addition of low end and high end which ever-so-slightly scoops the midrange as a result. This is where you get your first hint of that "blown speaker" sound this thing is (well, should be) known for. Alas, the Tube Amp setting Is just a harbinger of the total annihilation that is yet to come with later clicks of the dial...

Next is the Natural Distort setting:
One step up in gain is the Natural Distort. (I'm not really sure where they got these names, because all of them are fairly inaccurate?) At this tone selection you get your first little bump of low end, accompanied by your first real taste of the buzzy, squarewave kind of fuzz that is about to eat your face. It again sounds like a ballsy MKI Tone Bender turned to the max, but maybe with some heavy clipping added in. The affect is the same when turning the gain up; the overall sound fills out a bit, some lower and higher frequencies are introduced and the belching fuzz is more in your face.

Third is the Light Fuzz setting:
Here is where the sound begins to transition to the extremes this pedal is capable of. The lowest gain setting still throws out a nice gated and squealing fuzz, but this time its much more full and obnoxious. It has moved on from the MKI Tone Bender comparison and into a land all its own. Also at this setting high notes begin to buzz wildly and lower ones are much more pronounced and enveloping. Finally harmonics start to jump out at you like the best Big Muffs, making this killer on leads. Again as you turn up the gain it increases the sustain, widens the frequency spectrum and fills out the overall sound. 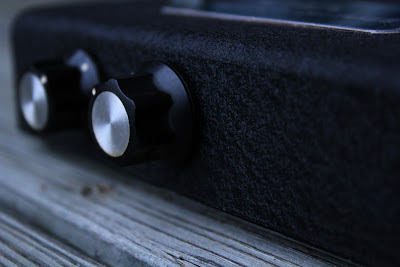 Fourth is the Medium Fuzz setting:
One step up from Light Fuzz is obviously "Medium", right? Well just like the name implies this 2nd-to-heaviest setting is just a bit crazier than its Light predecessor. Again adding more and more low end to the game, we are starting to approach that full-on Blown Speaker tone. This setting is great for bass; and with guitar, it's just insane! I have a hard time describing it any better than can be heard from the demo videos, but trust me, it just got real///

Lastly is the king kong Heavy Fuzz setting:
Oh Damn! This final setting is so intense that unlike the rest of them there is a very short compressed pause in volume after clicking it on. At either end of the gain knob you are given a treat; all the way down the gating is just wicked. Like if a zombie could build you a pedal it would bestow us this tone. It's just disgusting, and oozing with pure filth. As you turn up the gain for the final apocalyptic mass, a heavy clipping and colossal beast thrusts forward through your speakers, creating such excursion that even though they already sound blown, you may just actually push them to their limits.
Just mind blowing. 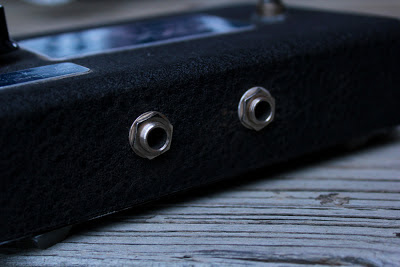 The fOXX Select-a-Fuzz was really damn unique for its time (hell, it's pretty unique for right now!). But just as other "strange" fuzzes of its era were overlooked, the lack of interest caused the Select-a to never really get off the ground. It is unknown just how many were actually made, but for how crazy this is and how few I have ever seen (3) I would estimate, not that many!

I hope you guys enjoyed our dissection of this alien lifeform!
and now, something to chew on/// 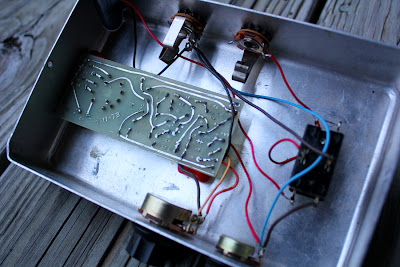 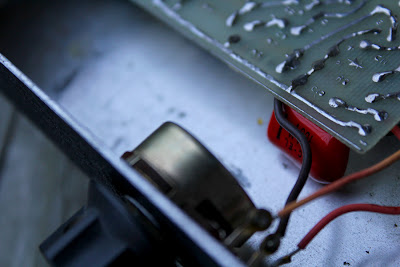 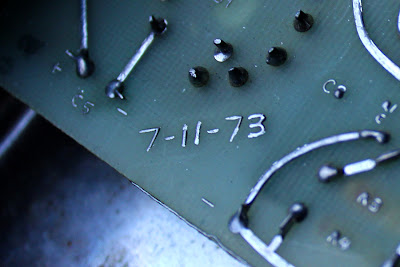