☟
So last week I was finally able to track down the somewhat elusive "Rat Tail" logo Proco Rat. 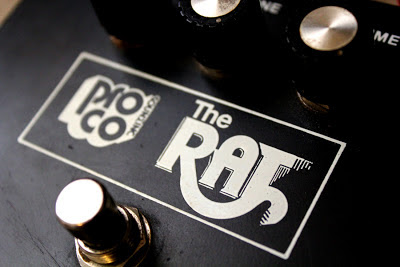 These were made in 1978 and for about a month or so in 1979, until the logo changed to the more common font we all know and love.

Well she arrived today and I have been going back and forth between her and my original White Face Rat from 1985. They both sound amazing. I have always been an advocate of those mid-80s Rats, but until today I didn't realize how similar they were to the originals from the late 70's. 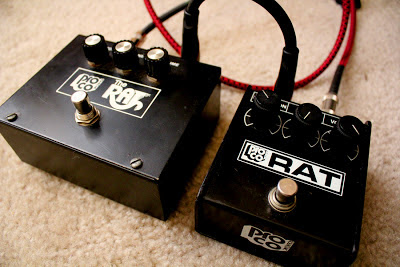 There are differences for sure, like the Tone knobs work in opposite directions and affect the sound in completely different ways. Also, with the Gain down a bit you can hear more tonal differences between the two than you can with it all the way up. But the main difference is that the White Face has just a little more midrange crunch and percussiveness going on. It's more of a distortion with fuzz tendencies whereas the Rat Tail version is about 50/50 fuzz & distortion. I do like the more primitive sound of the Rat Tail, but I also love the crazy harmonics you get from the White Face...

This is too hard for me to decide!
So like any good parent, I choose to love them both equally.